It's been a very busy year for me. At this time of year I’m reminded about the others in my life. Whether they be other folks, family, even pets. It’s important to remember the others in your life. No one can be in the industry without support. Even a little.
Happy Holidays to you! ☃
Posted by drcuervo at 2:32 PM No comments:

“People think I'm disciplined. It is not discipline. It is devotion. There is a great difference.”

This is one of my favorite quotes. People have often said that I’m disciplined in what I do. This quote goes further, and I agree with it. It really does take devotion to be successful in the industry you want to thrive in. I’ve seen disciplined people. Excellent at their craft. Anyone can have discipline, though, IMHO. Countless repetition of any task will make you very good. Technically good.

Devotion, however, will have you change, adjust, and evolve in the industry. Devotion requires love of what you want to do. Devotion will make you question what you know. It will make you memorable to the people who count. Part of devotion means stepping out of your comfort zone, like talking to people and networking (the comfort zone will be further discussed in another post).

The people I know who are successful have a great deal of devotion to their craft. Devotion also means facing down disappointment. Whether it be in yourself, other people, or your project. It makes no difference. Being devoted will help you get past the hard times. Because devotion will teach you that hard times are temporary so long as you have the ability to move past it. Devotion will show you that sometimes you will need to rely on other people. You can’t do everything yourself (no matter what you think). Or maybe you were wrong about something 😱 Yeah, I know. Shudder! No matter what, being devoted should allow for adaptation and improvisation when needed.

Now the question I was asked, by a colleague tonight: What comes first? Discipline or devotion?
I don’t think it makes a difference. I’ve seen it in both situations. I’ve seen a person who was not good at a craft become not only good, they became extraordinary. I’ve seen a person who was already in love with their craft become exceptional. The commonality was that each, in the end, had a great deal of devotion to their craft of choice. Results had varied.
What they shared was joy in their craft 😃

Special thanks to James Cardo for editing this post ^_^
Posted by drcuervo at 2:08 PM No comments:

With me being trapped by the unusual snow fall, and working from home, I took my own advice yesterday. I went outside and helped my wife build a snow skull. It was a moment that I will always cherish, it broke the monotony of work, and it did not take long.
Everyone needs to "stop & smell the roses", to use an old cliche. Yet its true. You can't be so absorbed in your work that small, and important, moments in life will pass you by. In fact, I'm taking a quick break right now to type this out. 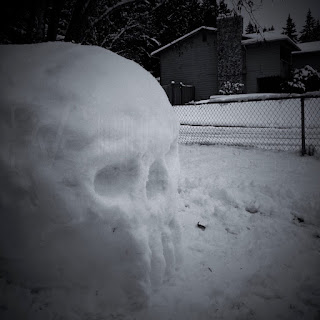