The More You Know 💪

I recently finished an assessment on Lighting and Compositing with the Game Art students. Normally, the assessment calls for using Nuke to compositing the render passes. My VFX students did this, however I know that game artist will never use Nuke in the industry. So I changed it up for the Game Art students to use Photoshop instead for the final compositing. Without them knowing it, I taught them how to build textures using layers. It's the same as compositing an image, with minor differences. One of the things I told them is that the more they know Photoshop the better, and more valuable, they will be as an industry artist. What all industry artists MUST understand is that the more they can apply the basics the less they will rely on specific apps to do certain jobs. In their case I don't want them relying on Substance as a crutch. Because there WILL come a day when they won't have Substance available and they will have to create textures.

The more an artist knows about basic techniques the better an artist he/she will be and the less reliant they will be on apps to do one job. And the better they will be at using that app, like Substance. For artists I'm talking about using layers, basic design principles, color theory, understanding how light works, composition, etc. I have a friend who is a traditional oil painter and his photoshop paintings look just like his oil paintings. Quite astounding. He can achieve this because he knows the principals of traditional painting and can apply them to photoshop. As a photographer I have a deep understanding of how light and shadows work together. That knowledge transfer easily to 3D.

When I was in college I was trained in the Classic art styles, as an abstract artist, a graphic designer, and photographer. I also took art history and psychology. All of this taught me how to view the world through a critical eye and provided an insight into how people perceive art. Only towards the end of my schooling did I start to learn 3D (on SGI machines using Softimage). I was able to apply everything I learned to the new tech that was being implemented in the industry. All of my high-end tech skills I learned on the job (there was no school for video games at the time).

If you already took higher-ed art classes then you'll have an advantage. However, you can still learn the basics at home, on the internet. There is no end to tutorials and learning materials. You have to go that extra mile, though. And practice. Every day. Even if it's a small thing just to keep you sharp. It's the small things that will give you the edge over everyone else.

The Holy Trinity of Game Dev 😇

IMHO there is a Holy Trinity of Leads in Game Development that exists and needs to be respected. 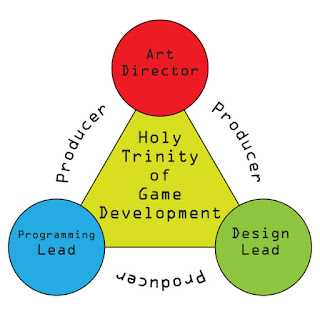 There are other parts to the team to keep the company running: executives, HR, marketing, etc.
Here, I'm on only referring to the core development members that are creating the game.
Each lead have people working under them. ADs have artists, PLs have programmers, DLs have designers. Even Producers could have production assistants. The chains of command.
(If you have a problem with another person on the team talk to your lead first. Ill cover this in another blog post.)

In an established and well functioning dev group this is the ideal scenario. If one of the Leads begins to interfere or do the job of another Lead friction usually happens because the said Lead has an agenda: to get his/her stuff done first AND does not have a foil to double check the work.
Example: If the Art Director suddenly does the job of the Design Lead then there is the possibility of the AD loosing design perspective. A Game Design Lead is there to advocate for the consumer so the consumer will play the game. Maybe reply it. So you can see the potential dilemma.
The Producer has the role of making sure that everyone is getting things done on time. The Producer will also help ease the jobs of the leads by effectively communicating in areas that are not understood by the other. Producers also love problems that can creep up and helps the whole machine keep running as smoothly as possible.

It's important for the Leads to REALLY understand the jobs of the other Leads. Not to know HOW to do their job. Just what they are doing in order to understand their point of view.

Now, there is something to be said for Indies where there are not enough people to do the distinct jobs. Indies may not have a choice but to wear multiple hats. That in itself is a monumental task that can really grind a person down. It can also create a hard core appreciation of the other's job.
I've worked on very small teams and very large teams. Both have their ups and downs:
Some people like tiny teams. Others like the giant AAA style studios.
My preference is somewhere in between, which can be very difficult to find.
They are out there, though 😁

Posted by drcuervo at 9:41 PM No comments:

Onegai shimasu (おねがい します)  🙇
Something that could potentially happen to you is getting comfortable. If that happens you have started on your path to becoming irrelevant. The only way to keep yourself relevant is to step out of your comfort zone. Your can't learn anything new without discomfort.

Learning a new piece of music, or a new modeling technique, or driving. No matter what it s you might screw up (the first time) and will have to do it again and again in order to be proficient. Ask for help from those ho know how to do whatever it is. Don't try to learn "in the blind". It's always best to have some sort of reference, like a video or another person.

You will always feel out of your element until you get the hang of whatever it is you're learning.
And thats OK. Its a natural reaction. Your brain and body have to adapt until muscle memory is achieved. Or whatever goal you set out is accomplished.

It's not to say you can't feel some of the comfort of achieving a new goal. Revel in it, and be humble. No one likes a showoff. If you can teach it, then do so. It will re-enforce what you learned. As a teacher I have to do my best to stay updated on the latest and greatest tech and techniques. I also rely on my students to show me new stuff, as well. If I start to get comfortable at my job  I know I'm no longer relevant and I always feel the need to change that.

I like podcasts, especially the TED radio hour. So I wanted to share this very topic that was covered.

There is a moment in every project, whether its writing a book, making a game, or creating a film, where you've had enough! Everything looks bad! Nothing is working! This thing sucks! I stink at this! That is the 85% mark. The Ugly Phase.

At this point you've spent a lot of time, maybe with others, on whatever it is. You're getting tired of it. It does not look good or feel right because you've spent a ton of power on it and it's not done. If you have coworkers you are probably getting sick of them, too! This is where you really see all the perceived flaws because it's not complete. This is the hardest part of any project to get past.

I've seen it happen. Where someone will abandon the project at this point, vowing never to return. There is no getting around it, the Ugly Phase. All you can do is find support with others, like your teammates, and do your best to keep moving. I recommend keeping things that you made at the beginning of the project to see how far you have come. If its your studies, keep you first assignment, and cringe as to how bad it is compared to what you have now. It will get better so long as you hod on and do your best to work through it.

Remember that its OK to feel these things. We're only human. Go and let off steam. What you should not do is bring others down. That will come back around to haunt you eventually.

Once you get past the 90% mark you will start to see the end in sight and hope will return. The project is almost complete. Others will see the end as well and that will help encourage you to finish.
The relief, and rewards, will always be worth it. And then you get to do it all over again 😈
Posted by drcuervo at 8:15 PM No comments:

In my opinion all director level managers (like Art Directors) need a Devil's Advocate. They need someone to ask the hard questions. Someone who is on the front lines with the rest of the crew. A person who can keep an objective view of the goals and the team. What Directors DO NOT need are suck-ups and yes-men. They don't need anyone to feed their egos. Independent thought is so important as well as double checking to make sure the Director is on the right path for the team.

This means the Director must be flexible. To bend and not break. Good Directors are not dictators.   they are adaptive to new and unexpected situations and actively listen to their crew. If the majority of the team is in agreement that the product is going in the wrong direction, the Director should listen.

One of the toughest things for a Director to do is to make an unpopular decision. Like letting a team member go. These types of decisions must always be for the benefit of the team. Or the company. The Director will have to have a thick skin to withstand the potential fallout and redirect frustrations to creative efforts. So long as the decision is a benefit to the product, or company, it will work itself out. What's even more difficult is if the director has a personal stake in the decision. Example: the person being let go is a friend. I've had the unfortunate duty of letting friends go from jobs. Its worse because I brought them into the job to begin with. If directors appear to be callus or cold it's because they may be doing their best to keep an objective distance of the team and the product. This is why it can be difficult for friends to form and maintain a company. Business and the longevity of the products can sometimes interfere with friendships.

Keep in mind that a Director will do his/her best to maintain scope of the product or company as a whole. Which is why they need a Devil's Advocate. Sometimes the Director needs to be questioned if they decision they are making is a good one. That its actually good for the rest of the team, the company. Directors must always maintain the long view. In which case the Director must seek council with their Devil's Advocate.

A Director's success will be reflected in the rest of the team's success. In the company's success. The rest of the team will want to work with the Director on the next project.
And a tight team, that trusts each other, is a successful team.
Posted by drcuervo at 8:53 PM No comments: